A flue is one of the most important parts of a fireplace or stove. Responsible for drawing away smoke and combustibles and drawing in air, a flue is essential to the proper functioning of a fireplace. But, not all flues are the same. What’s the difference between a balanced flue and a conventional flue? Read on to find out.

What is a flue?

Before we take a look at the differences between conventional flues and balanced flues, let’s take a closer look at what a flue actually is. 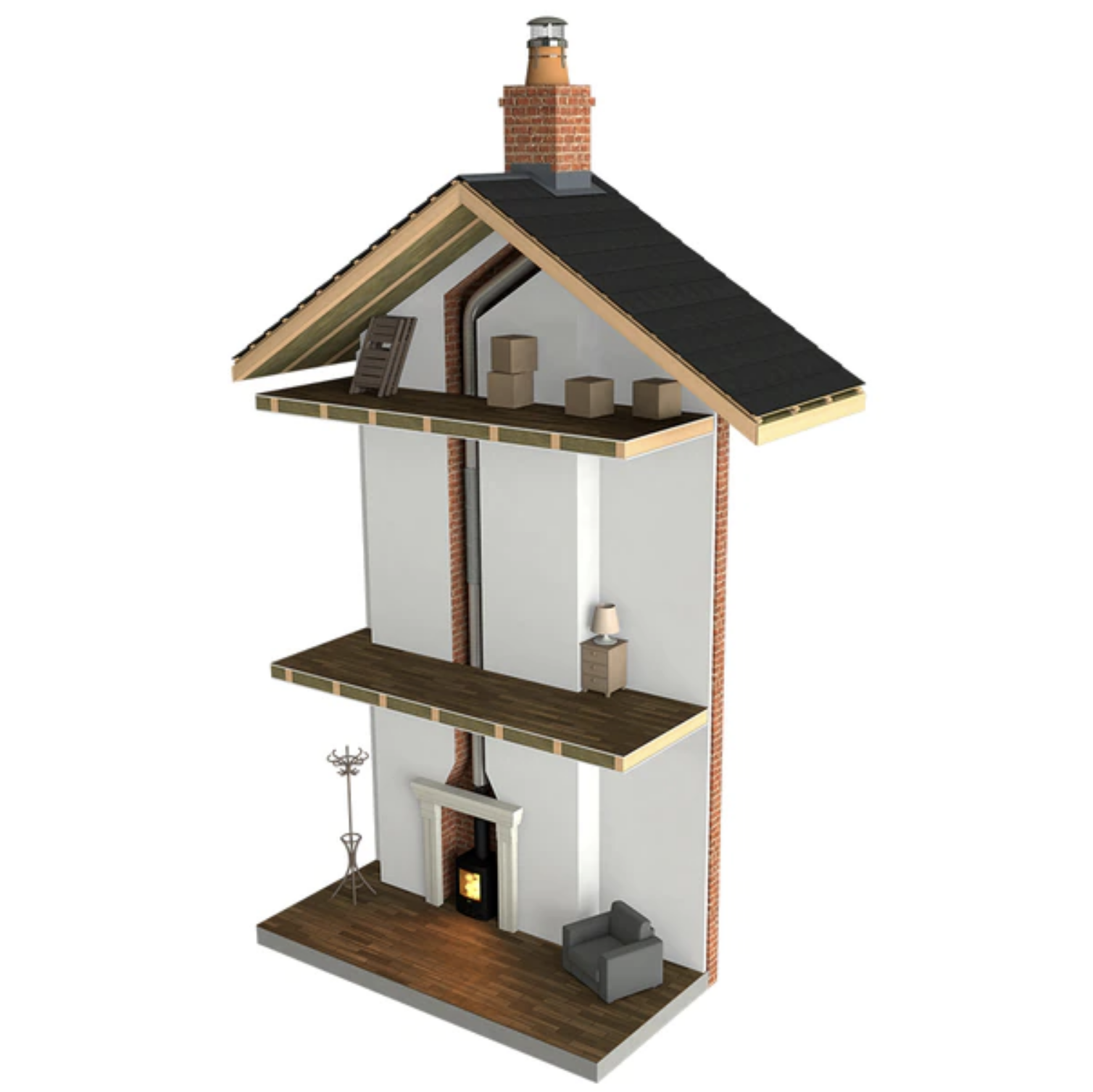 (Visualisation of a conventional flue set-up).

Wikipedia defines a flue as, “a duct, pipe or opening for conveying exhaust gases from a fireplace, furnace, water heater, boiler, or generator to the outdoors”.

In other words, a flue is the channel by which smoke or combustibles are drawn away from your appliance and up out of your chimney. As we’ll see though, balanced flues mean you don’t necessarily need a chimney…

Tip - you’ll often find that the terms flue and chimney are used interchangeably.

What is a conventional flue?

Conventional flues (also known as traditional flues) have been around for hundreds of years - the first chimneys appeared in large dwellings in Europe during the 12th century. Usually constructed from brick, conventional flues are what people tend to think of when you ask them to picture a chimney.

Conventional flues operate by pulling the warm air (and smoke and combustibles) from your fire, up and out of the top of the chimney. As this warm air rises up the flue, it pulls air from the room and through the fire/stove and up into the chimney.

Conventional flues usually terminate in clear air (2.4m away from anything else), or 600mm above the ridge of the roof.

Class 1 chimneys/flues are the oldest type of chimney/flue. They date back to the era when every home had an open fireplace that burned solid fuels such as wood or coal. Since the 1960s and the rise of new house building methods, Class 1 chimneys have become less common.

There are no major restrictions as to what kind of fire you can have with a Class 1 chimney.

You can use Class 1 or Class 2 solid fuel fires, electric fires, gas fires and even gel fires with a Class 1 chimney (although certain modifications to the chimney may be required to accommodate some of these types of fires).

Many older Class 1 chimneys are not sealed (lined with clay) and will require a flue liner to be installed. A flue liner will improve the performance of your appliance and the chimney itself.

Note - if you intend to use a flue liner as part of your chimney set-up, ensure you use the correct grade for your appliance. If you are burning coal you will need 904 grade. If you are using cooler-burning fuels such as seasoned wood, you can use 316 grade.

Class 2 flues are also known as prefabricated flues. They will normally be found on newer properties where a steel flue is incorporated into the building. You can easily recognise prefabricated flues - they look like small thin metal chimneys protruding from the roof line.

You can use electric, gas and gel fires with Class 2 flues. Class 2 flues can not be used with solid fuel fires. This is because they aren’t specified to handle the temperatures generated by solid fuels.

But, what if you haven’t got a chimney/flue in your home? (And it’s an increasingly common occurrence for homes not to have one). In that case, a balanced flue could be the answer.

How do conventional flues work?

As your appliance (fireplace or stove) expels hot smoke and combustibles, these are drawn up the flue to the colder air outside. As part of the stack effect, this upward movement of hot air then draws in colder air into the room from outside, creating a sort of ‘cycle’ of air that keeps your fire burning and smoke drawing up the flue.

What is a balanced flue?

A balanced flue is for use when your property doesn’t have a functioning chimney. Balanced flues are very versatile and can be fitted in almost any home (provided the external wall can be built through).

Don’t let that mention of building through walls deter you though. In the majority of cases, only a small amount of work is required to fit a balanced flue in a home.

How do balanced flues work?

Balanced flues don’t use a traditional chimney and as such work on slightly different principles.

In contrast to conventional flues that use an open circulation of air, balanced flues work in a closed, self-contained, system (hence, when a balanced flue is connected to a balanced flue gas fire, the whole set up can be referred to as a ‘closed combustion gas fire’).

Balanced flues consist of two pipes (usually one within another, known as a coaxial pipe). You’ll sometimes hear balanced flues referred to as ‘twin wall pipes’ because of this.

The appliance not only expels its fumes into this coaxial pipe, but draws in fresh oxygen from it too. This means the flue is simultaneously feeding the fire with oxygen, and getting rid of fumes. Think of it as being a mini self-contained chimney.

(Balanced flues tend to use small co-axial pipes to both expel exhaust fumes and draw in fresh oxygen).

Much of the time, the choice of whether you’ll pick a balanced flue or a conventional flue is made for you. If you don’t have a chimney, then you’re best choosing a balanced flue (unless you want to go to the expense of building an entire chimney and fireplace).

However, it can still be useful to know how the two types of flues and their respective appliances ‘stack up’.

Balanced flue fires can be extremely efficient (some are up to 90% efficient). As they are closed systems they are not impacted as much as conventional fireplaces by external factors such as air pressure and the weather. Traditional solid fuel fires are not necessarily as efficient, however solid fuels in general are relatively inexpensive.

Balanced flue fires are easy to use. The majority of these fires can be started with the push of a button. Solid fuel fires connected to conventional flues can involve a bit more work. Perfecting fire lighting can be a bit of an art form!

Both balanced gas fires and traditional solid fuel fires are economical to run. As for the flues themselves, balanced flue systems will generally be more expensive than a conventional flue. This is because balanced flue systems are more complex. The most important thing is ensuring you get the right type of flue for your appliance and chimney set up.

We hope you found this guide useful. Whether you’re looking for a balanced flue system or a conventional flue system, please explore our website. We’ve got flues to suit every type of home or property.

What Is a Balanced Flue & How to Install One | What Different Types of Chimneys Are There? | How do You Fit a Chimney Liner?