For many people, this may seem like a question with an obvious answer. But, in the world of chimneys, terminology is often used interchangeably, causing confusion and making it a challenge to buy the right parts for your chimney upgrade. So, keep reading and we’ll eliminate this confusion and tell you what the exact difference is between a chimney and a flue.

Are chimneys and flues the same thing?

Let’s begin with the answer you came here looking for.

Chimneys and flues are different - but related. Let us explain by defining each one:

> Chimney - this is the structure which connects your fireplace to the outside world. A chimney contains a flue (some chimneys will contain more than one flue).

> Flue - this is the space or cavity within the chimney which allows the smoke and gases from your fire to pass up, away from the fire, and out of your home.

As you can see a chimney is the structure which contains the flue. Chimneys are far more complex than many people realise, and in addition to the flue will also include the fireplace, the hearth, chimney breast, chimney stack and chimney pot.

All of these bits go together to create a functioning chimney:

So, when people talk about a chimney or a flue, they’re probably talking about different parts of the chimney. When you’re having any work done on your chimney, it’s always important to clarify exactly what the builder or chimney sweep is talking about.

What are the different types of flue?

Hopefully, at this point, we’ve done a good job of explaining the differences between a chimney and a flue.

However, this is where things get slightly more complicated. There are different types of flues.

Below, we’ll set out the different types of flues that you need to be aware of.

These types of flues are typically only found on older houses (normally homes that have been built prior to the 1960s).

Masonry parged flues are typically built from brick or stone and lined with a lime mortar. These types of flues are very basic and will accommodate almost any kind of fireplace - however, if you’ve only just moved into a property with this type of flue, you should have it inspected by an experienced chimney sweep before you first use it.

Whilst simpler is often better, masonry parged flues do have some drawbacks. Firstly, they do not tend to be very well insulated; this can lead to problems with the draw of your chimney. Secondly, lime mortar has been known to ‘soak up’ combustible materials such as soot and creosote. So, it’s vital that you have this type of flue inspected and cleaned on a regular basis.

If you own a house built after 1960 that has a traditional chimney, then it’s likely your flue will be lined with either concrete, pumice or clay.

Pumice, concrete and clay began to be used to line flues as they have superior insulation properties compared to lime mortar. These materials are also able to withstand fluctuations in temperature - this has the benefit of maintaining your fire’s ‘draw’ even in particularly cold weather.

It has now become very popular to line existing flues with stainless steel flue liners. Using a liner allows you to radically improve the performance of your fireplace and will improve the way in which your flue functions. 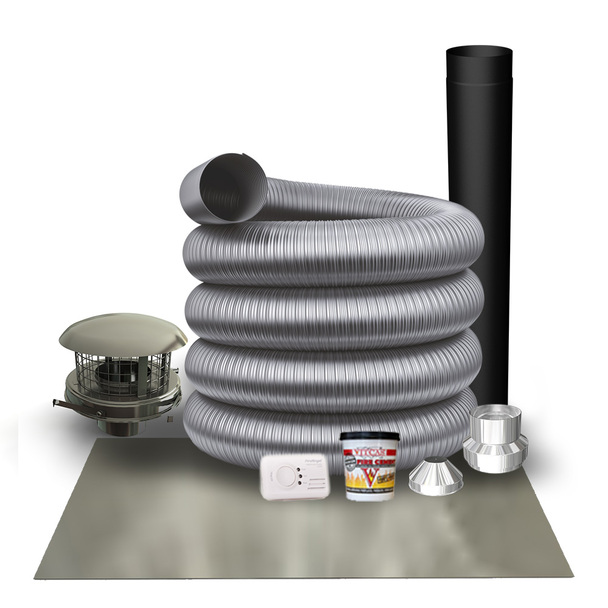 A stainless steel flue liner will improve the efficiency of your fireplace, protect the flue from smoke and other combustibles and will also make it easier to both light and maintain your fire.

> 316 grade - ideal for use with fires that are burning seasoned wood only, or for gas fires.

> 904 grade - should be used if you will be running your fireplace very hot, such as burning coal.

Stainless steel flue liners are also usually straightforward to install. However, if your home has more than one storey, then you’ll need to use scaffolding as you’ll be working at height.

Many new homes are now built without a traditional chimney (this is a trend which has developed since the 1980s).

However, if you live in a home without a traditional chimney, you can still have a fireplace - you’ll just need to install a twin wall flue system. 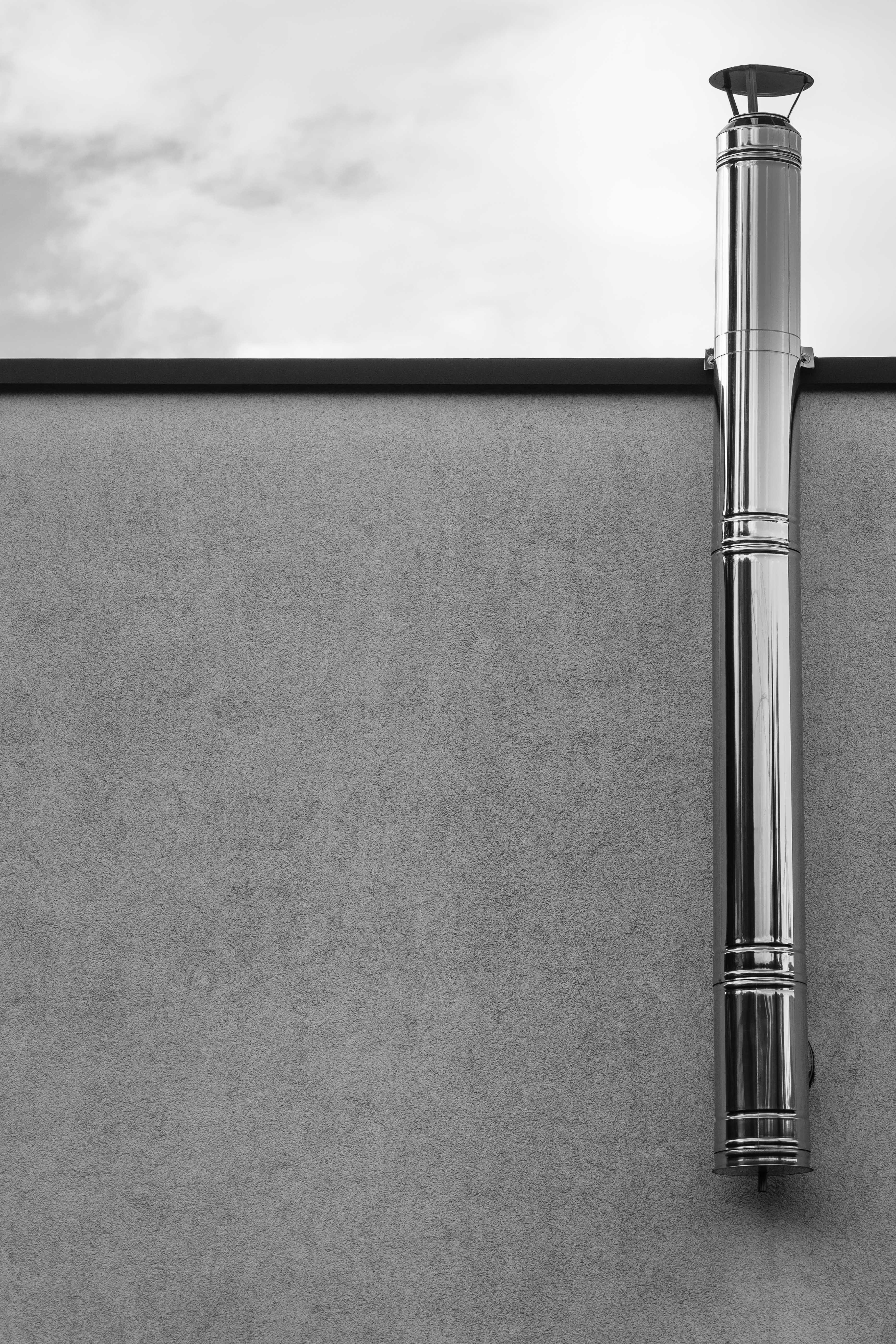 The best way to think about a twin wall flue system is as a sort of ‘self contained’ flue. As you’ve probably guessed from the name, it is in fact two flues - one inside the other. This means the flue stays cool enough to pass safely through walls, ceilings and roofs. 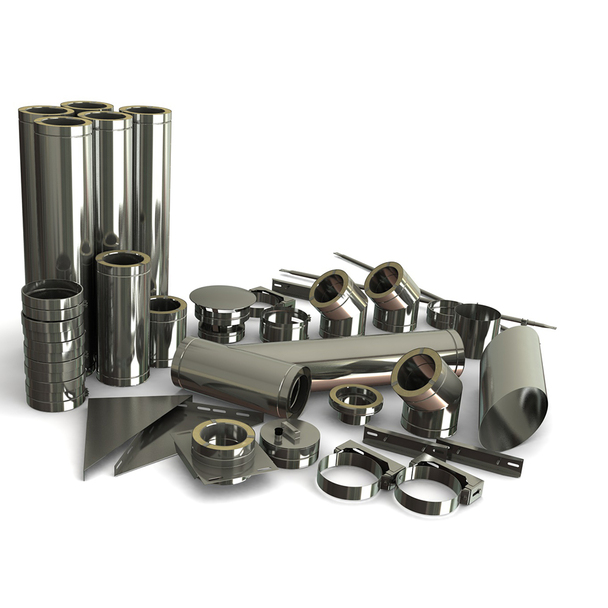 As such, a twin wall flue system will allow you to install a fireplace almost anywhere in your home.

A pre-cast flue is, as the name suggests, a flue which is built out of a series of concrete blocks and integrated within the walls of your home. 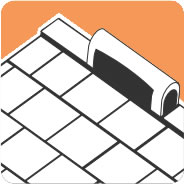 You’ll normally find pre-cast flues in homes built within the last 20 years. You can spot if a home is using a pre-cast flue by a small ridge vent which is located on the roof line.

So, those are the main types of different flues you’re likely to encounter.

However, as you’ll soon see. It doesn’t end there. You should also be aware that there are different types of chimney.

What are the different types of chimney?

As we’ve seen, there’s a lot of different parts that come together to create a chimney. The flue, fireplace, hearth, chimney pot etc all play a part in the proper functioning of a chimney.

However, ask any chimney sweep and they’ll tell you that there are two main types of chimney; Class 1 and Class 2.

We explain more about each type of chimney below.

A Class 1 chimney is what we consider to be a ‘traditional’ chimney. They were primarily built prior to the 1960s.

Class 1 chimneys are nearly always brick built (although you will find stone-built examples) and will be situated on either an exterior or interior wall of a property. These chimneys can be used with all types of fires and can sometimes include multiple flues (this is especially true where a Class 1 chimney serves older apartments or flats).

Fast forward to the post-1960s and you’ll find the majority of homes being built with Class 2 chimneys.

Class 2 chimneys are also known as prefabricated chimneys as they are normally constructed from a series of interlocking pipes that’ll run through your house and up into the outside. Class 2 chimneys can normally be only used with gas fireplaces.

There you have it then; the difference between a chimney and a flue can be much more than you think!

If you’re keen to upgrade your chimney and ensure it’s performing at its best this winter, then why not upgrade to a stainless steel flue liner? They’re one of the most cost effective ways of improving your home heating.