With winter approaching it makes sense to ensure that your home boiler system is fully functioning and operational. And, one of the most important parts of your boiler system that you should check is working, is the flue. If you’re wondering what that is and how it works, then keep reading!

What is a boiler flue?

The chances are that you have a boiler in your home to heat the water for your radiators and water system; approximately 95% of homes in the UK are currently centrally heated.

So, if you’ve got a combi, regular or system boiler, then you’ll have a boiler flue.

Put simply, a boiler flue is a pipe that carries the exhaust gases that are generated by the boiler, outside of your home.

A boiler flue is required because domestic boilers burn gas or oil, which creates harmful by-products such as carbon monoxide. It’s vital that these harmful gases are vented outside of your home - hence the need for a boiler flue.

Note - if you have a back boiler, which is a gas boiler behind your fireplace, then you won’t have a boiler flue. This is because the flue gases exit via your chimney. If you do have a back boiler, be aware that they are no longer being replaced as they are inefficient.

How does a boiler flue work?

A boiler flue works by expelling the harmful gases that your boiler generates as it burns gas or oil to heat water for your home.

With most boiler systems, the flue simply uses the differences in air pressure and temperature between the inside of the boiler and the air outside, to move gases into the atmosphere outside.

There’s one exception however.

How much does a boiler flue cost?

This is a bit of a tricky question to answer as there are so many variables. However, we’ve set out some rough guidance below:

> If you’re having a new boiler installed, then you won’t need to worry about the boiler flue as the cost of this should be included in the overall cost of the installation.

> Should you be replacing an existing boiler flue, then expect to pay between £70 to £120.

> In the case that you’re having your boiler flue extended, then you’ll pay between £40 to £60 per metre of extension flue pipe or for flue pipe bends.

Why it’s important to use a boiler flue

We’ve already alluded to the necessity of having a quality boiler flue installed as part of your heating system, but given the serious consequences that can arise if you don’t, we thought we’d drive the point home.

The biggest danger of not having a boiler flue, or a boiler flue that isn’t operating properly, is carbon monoxide.

The dangers of carbon monoxide

We strongly recommend installing a carbon monoxide alarm next to your boiler. You should also have your boiler serviced annually by a Gas Safe engineer (or an OFTEC qualified technician if you have an oil-fired boiler).

How to spot if your boiler flue is blocked

One of the leading causes of carbon monoxide leaks from heating systems is blocked boiler flues. 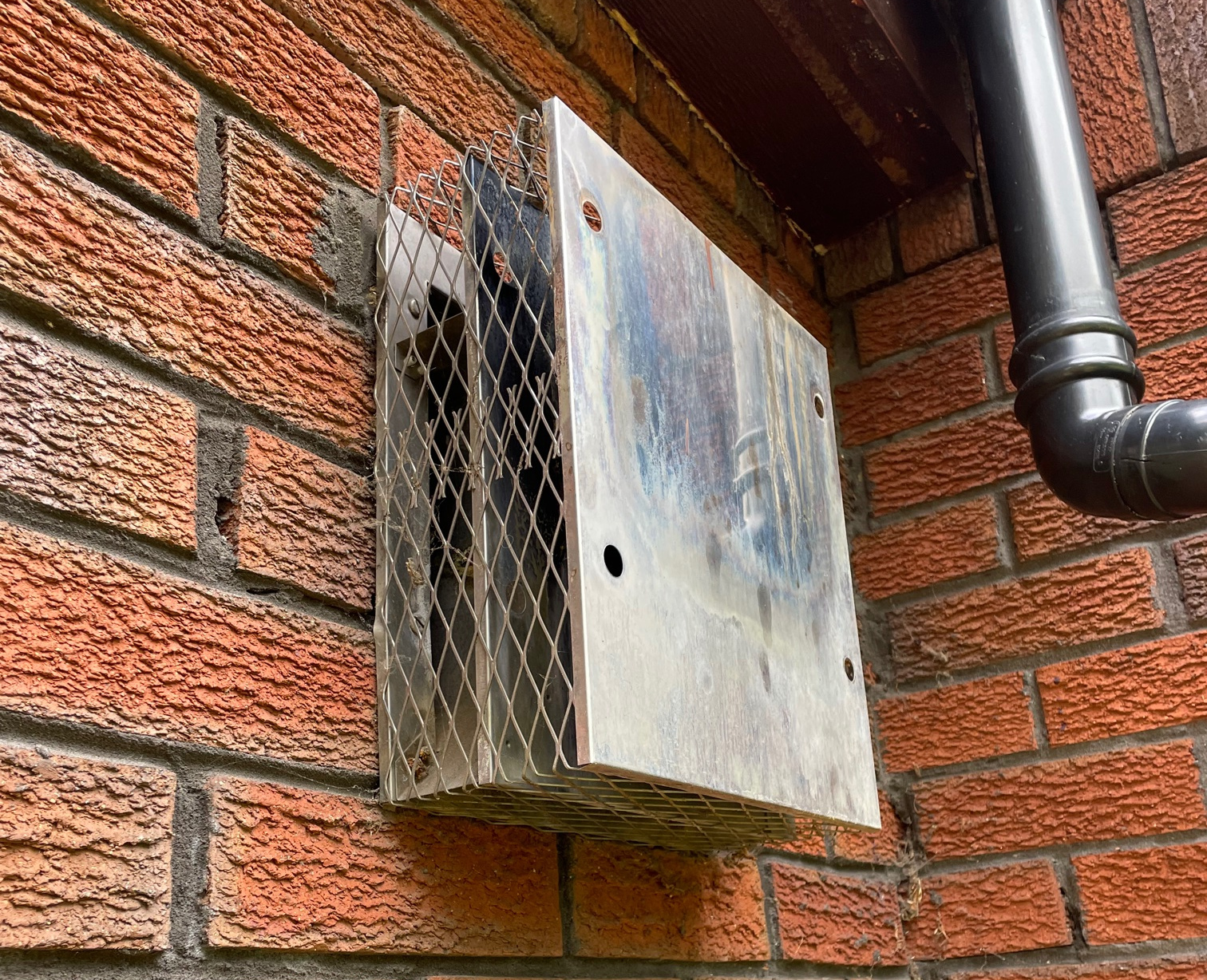 (It’s important to check that your boiler flue outlet is clear and free from leaves and other debris which can become trapped in the outlet’s mesh etc).

If your boiler flue is unable to expel noxious gases because of a blockage, then those gases will inevitably back up into your home; something which you definitely want to avoid.

So, how do you know if your boiler flue is blocked? Spotting the signs of a blockage can be tricky, so here are some things to look for.

If your flue is beginning to develop white stains where it connects to the heating system, this could be an indication of a blockage. This is because a boiler flue which is regularly venting hot gases is less likely to oxidise. Signs of oxidation therefore, indicate that the flue hasn’t vented hot gases in a while and could be blocked.

Nothing beats taking a very close look at your boiler flue. Take a close look when your heating system is turned off and see if you can spot any build ups of leaves, twigs or other detritus that could be blocking the flow of gases.

It’s particularly worth inspecting your boiler flue following a storm, a period of windy weather, or in Autumn in general.

Naturally, it’s easier to inspect a horizontal flue than a vertical one.

Note - if you have your boiler inspected and serviced on an annual basis, then this service should also involve an inspection of the boiler flue.

What should you do if your boiler flue is blocked?

If you do find that your boiler flue is blocked, you should turn off your heating system immediately. Turn off all gas fed appliances and cut off the gas supply.

You should also open all the windows of your property and get as much fresh air circulating around your home as possible.

Don’t try to unblock the boiler flue yourself - you should always get a Gas Safe Registered engineer to undertake any sort of emergency or remedial work on your heating system.

What types of boilers need a flue?

As we’ve outlined above, the majority of boilers will require a flue - that’s because they burn fossil fuels such as gas or oil which give off harmful fumes. 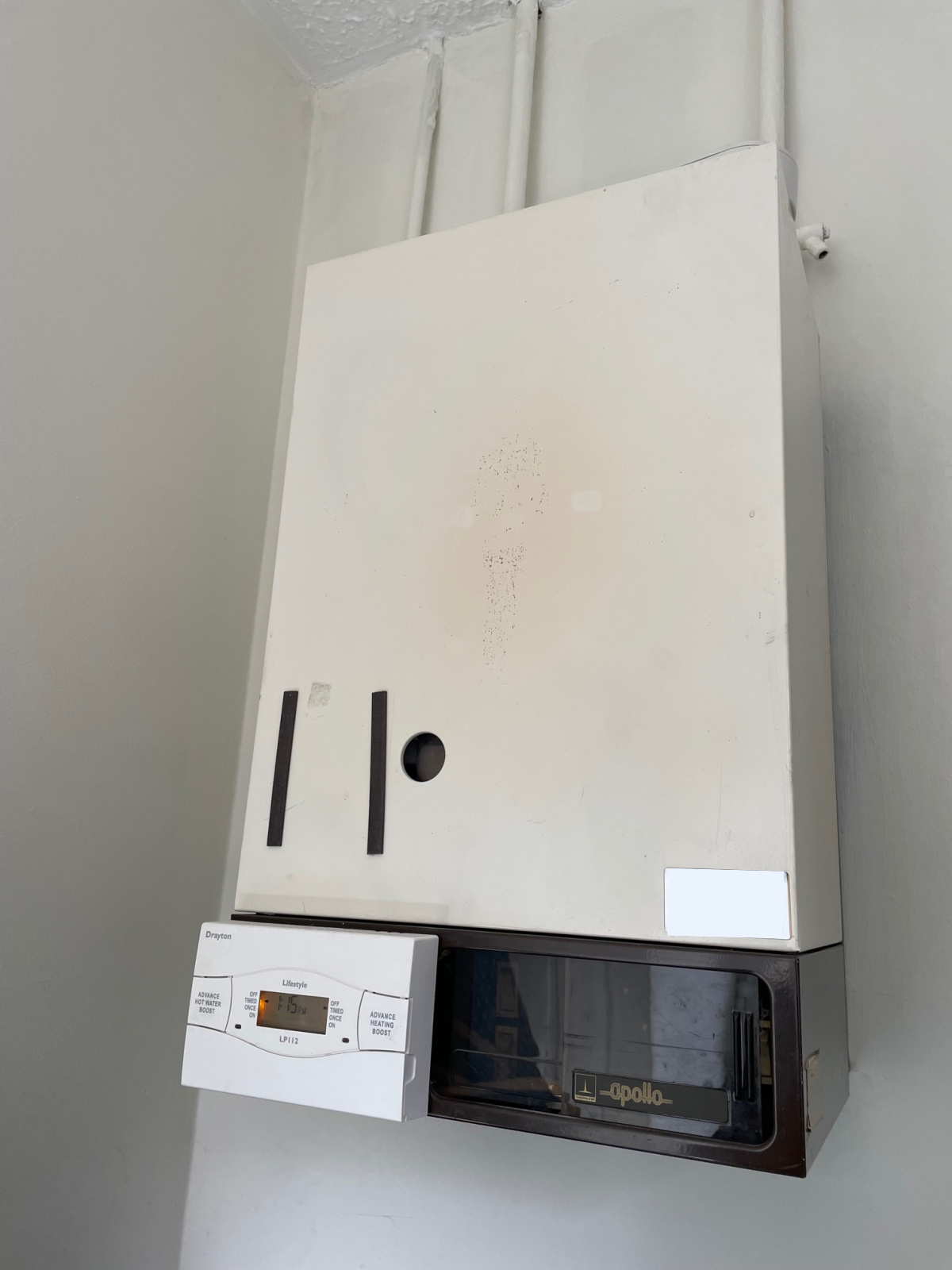 (Traditional gas boilers such as the one pictured will require a flue).

However, there are some exceptions.

The following types of boilers do not require a flue:

> Back boilers - as we mentioned earlier, these types of boilers sit behind the fireplace and therefore use the chimney to vent gases.

> Electric boilers - as electric boilers don’t burn any type of fuel, they don't require a flue. They aren’t generating any gases which need to be expelled.

In addition, if your property is heated by a renewable energy system (e.g. solar), then it’s unlikely that you’ll require a boiler flue.

Where is a boiler flue located?

Your boiler flue will be located on the exterior of your house, usually in close proximity to where your boiler sits on the inside.

What types of boiler flue are there?

There are two main types of boiler flue; horizontal and vertical.

If you spot a pipe exiting through the wall of your home, then you have a horizontal boiler flue. These are the most common type of boiler flue in the UK. They are typically black, white or silver and resemble a sort of ‘pipe’ exiting the wall.

As the name suggests, vertical boiler flues exit vertically from the roof of your property.

In the majority of homes, boilers will be installed on an interior wall. However, if this isn’t possible (or the boiler is located in the loft/roof cavity), then a vertical boiler flue will need to be used.

Whilst most boiler installations can be carried out by a qualified heating professional, the installation of a vertical boiler flue will often require the services of a roofing professional too - this is to ensure that the roof remains watertight and is properly insulated against the heat of the flue.

In addition to identifying whether you have a vertical or horizontal boiler flue, there is something else that you should look for.

Note - it’s important to identify the age of your heating system, particularly if you intend to have maintenance work carried out on it.

Does a boiler flue have to be straight?

However, some types of boiler will accommodate longer boiler flues or boiler flues that feature bends. The number of bends will depend on the length of flue allowed by the boiler. Boiler flues with bends can be useful in situations where your boiler is in a compact or difficult to reach location.

What boiler flue regulations are there?

As you can imagine, when it comes to something that plays such an important role in keeping people safe, boiler flues are subject to a range of stringent and particular regulations.

Whilst regulations are subject to change, and we can’t guarantee a complete list of applicable regulations, we’ve set out some of the key parts of the regulations below:

> The boiler flue should be situated at 2.1m above ground level if it’s facing a pathway or thoroughfare.

> Boiler flues should be situated at least 300mm below, above or alongside any windows, air vents or other forms of ventilation on a home.

> Boiler flues should sit no nearer than 75mm below any guttering, drainpipes or soil pipes.

> Boiler flues should not be situated any closer than 200mm below any eaves (the roof overhang).

If you are installing a vertical boiler flue, then the following additional regulations apply:

> The boiler flue should be at least 2000mm below a Velux window.

> The flue should sit at least 300mm above roof pitch or a flat roof.

Note - those are the minimum clearances that apply, however be aware that regulations do change. In addition, larger, more powerful boilers may require bigger clearances. 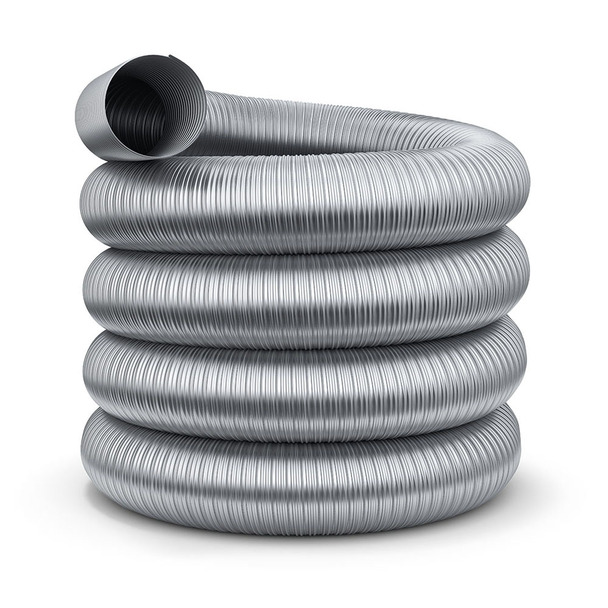 Trade Price Flues: the home of all things flue related!

We hope that you’ve found our guide to boiler flues useful. Here at Trade Price Flues we stock a huge range of different flues, boiler accessories and useful items such as carbon monoxide alarms. Explore our website, and if you’ve any questions, just let us know.

UK Gas Boiler Ban 2025: What You Need to Know| Is There an Alternative to Lead Flashing? | Do You Need a Chimney Cowl on Your Chimney?