Do you want your fireplace to be more efficient, easier to light and produce less smoke? Then invest in a chimney fan. A chimney fan is a cost-effective way of boosting the performance of your fireplace - provided you buy the right one. To find out what type of chimney fan will be right for you, read our chimney fan buying guide.

What is a chimney fan?

First of all, let’s start with a definition. The word chimney fan can mean different things to different people.

However, here at Trade Price Flues, we stick to a simple definition - a chimney fan is a remote controlled fan which is fitted either at the top of your chimney (or to a twin wall flue system), which can be turned on or off to improve the draw of your chimney.

This, in turn, will make it easier to light the fire in your fireplace or appliance and will ensure an efficient, strong burn throughout the life of the fire.

Tip - don’t confuse chimney fans with stove fans. A stove fan is a fan which sits atop a stove and is used to circulate heat around the room in which the stove is situated.

What are the benefits of installing a chimney fan?

We’ve already touched on some of the benefits of having a chimney fan installed, but let’s take a closer look at the positives of chimney fans…

Installing a chimney fan will make your life a whole lot more comfortable and easy.

Not only will a chimney fan save you time, but because your fire will light quickly, you’ll be less likely to get dirty and disheveled.

A chimney fan will increase the efficiency of your fireplace. Because your fire will be receiving the optimum amount of oxygen, it’ll burn each piece of wood or fuel effectively.

Chimney fans can increase the efficiency of fireplaces by as much as 15%. Over the long term this will add up, saving you money on fuel bills, as well as making your home much warmer.

It’s a fact that solid fuel fires give off particulate matter in addition to the usual smoke and combustibles.

Particulate matter is a leading cause of air pollution and can be harmful to your health.

A chimney fan, by making your fire burn effectively, reduces the amount of particulate matter that your fire will give off.

Fireplaces can suffer during stormy, windy weather. Wind blowing across the top of the chimney can affect the draw of the chimney, causing your fire to gutter or even extinguish.

A chimney fan will ensure that the chimney draw remains consistent, in even the most challenging weather conditions.

A leading cause of chimney fires is birds nests causing blockages in chimney cavities.

Because chimney fans sit over the opening of a chimney, they prevent birds, squirrels or other critters from getting into your chimney and causing problems.

If you use a chimney fan in conjunction with a stove, you’ll find that the stove remains in better condition. Parts like the stove glass will remain clear rather than clouding up or going black. This is because the chimney fan is making the fire burn efficiently and so burning up the combustibles that make your stove dirty.

You can replace a tall chimney with a chimney fan

If you have a particularly tall chimney in your home and you’d like to make it shorter and less obtrusive, you can do so with a chimney fan.

A chimney fan will maintain the draw that you previously would have gotten from the tall chimney flue. Plus, a chimney fan will actively push smoke and combustibles out and away from the chimney, roof and your neighbours.

Do I need a chimney fan?

There are several reasons you may choose to invest in a chimney fan.

Firstly, you may find that it’s consistently difficult to light your fire. Once it’s burning, your fire may burn poorly, with smoke drifting into your room etc.

This occurs because your chimney has a poor ‘draw’. Poor draw can be down to a number of reasons such as a damaged or partially blocked chimney or an imbalance in air pressure between the inside or outside of your home.

The latter - air pressure imbalance - is increasingly an issue in modern homes. This is because most new homes are designed to have low air permeability and do not leak air. The result of this is that open fireplaces in modern homes cannot get sufficient air in order to burn properly.

To solve this problem, many homeowners now choose to buy a chimney fan.

Note - chimney fans can be installed on both steel and brick chimneys. Just ensure you buy a fan that is compatible with the diameter of your chimney. 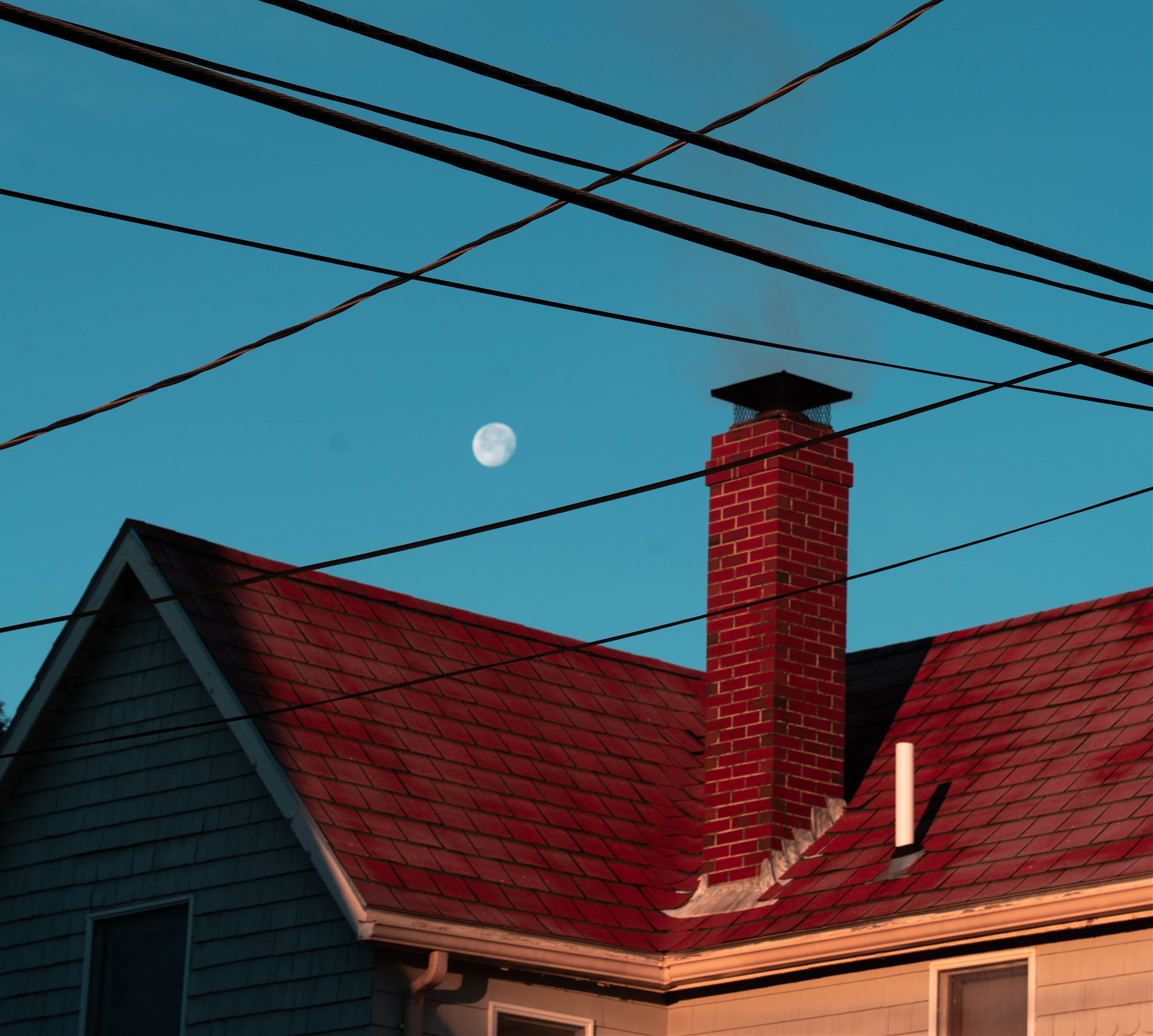 What are the different types of chimney fans?

Although chimney fans all do the same job - improving the draw of the chimney - it’s worth noting that you may have to buy a specific chimney fan depending on what type of fireplace or appliance you have.

This is because different types of fuels burn at very different temperatures. Additionally, a stove will tend to burn hotter than an open fireplace. As such, it’s important that you buy the right type of chimney fan for your home.

As well as chimney fans that are suitable for different types of fuel, you can also buy chimney fans with either manual or regulated controls.

A manually-controlled fan, as the name suggests, will simply spin at a particular setting unless you manually change it. So, you might notice the draw of your fire is diminishing. In which case, it’s up to you to adjust the fan controls manually to get the draw back to optimum.

A regulated chimney fan on the other hand will monitor the draught in the chimney at all times. It will automatically adjust the speed of the chimney fan to ensure the draw remains consistent.

Tip - when buying a chimney fan, make sure that you buy one that operates in accordance with the requirements of BS EN 15287-1.

How are chimney fans installed?

Chimney fans are simple, yet effective pieces of equipment.

A chimney fan is normally installed at the very top of the chimney, covering the opening of the main chimney cavity. If you have a brick chimney, then it’s usually possible to install the chimney fan within the chimney opening so that it’s not visible from the outside.

Once installed, you can then turn the chimney fan on or off. Quality chimney fans also allow you to ‘modulate’ the fan, so that it spins faster or slower depending on how your fire is burning.

How much energy do chimney fans use?

Luckily, most chimney fans only use around 30-40 watts at full load.

You can also turn off your chimney fan once your fire is fully burning (unless your chimney has a really bad draw all the time).

How do you maintain a chimney fan?

Quality chimney fans are designed as individual, self-contained units and as such shouldn’t require servicing.

However, they must be cleaned.

Many chimney sweeps will be happy to clean your chimney fan at the same time that they’re sweeping your chimney. Just remember to tell them that you have a chimney fan installed before they start work.

You should also turn on your chimney fan regularly - even periodically outside of the burning season. This will prevent the fan from seizing up.

Hopefully we’ve now made it clear why many people choose to install a chimney fan on their chimney. You’ll enjoy a host of benefits for relatively little outlay.

Here at Trade Price Flues we’re big advocates of chimney fans and keep a wide range in stock. Below we’ve highlighted some of our most popular models for solid fuel, gas and oil/biomass fired appliances. 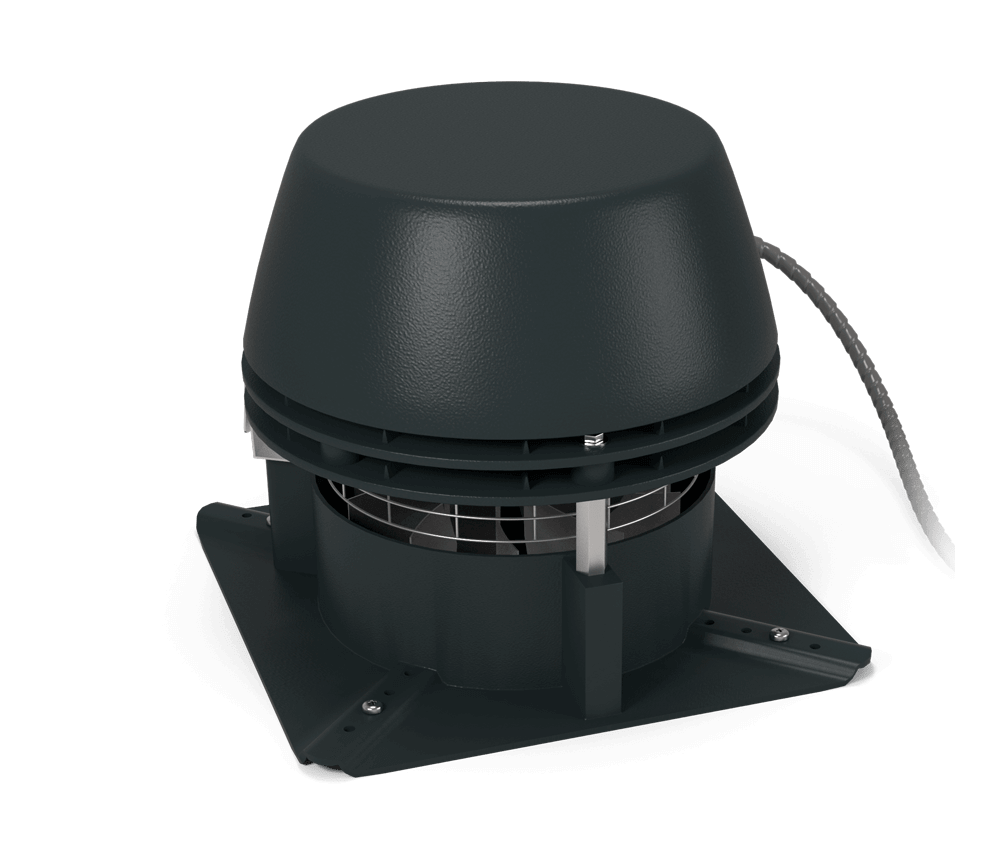 This is a mechanical chimney fan that is designed to expel smoke and combustibles horizontally, and which is particularly suitable for use with solid fuel-burning fireplaces and stoves.

The axial impeller is made from stainless steel which means it can be easily cleaned by chimney sweeps. The chimney fan itself is made from cast aluminum and is enclosed within a robust casing that can withstand temperatures of up to 250ºC for long periods of time.

This chimney fan is driven by a heat-resistant asynchronous motor with permanently-lubricated ball bearings. In addition, this model features a cooling vane wheel and cooling air slots. All in all, this is a well designed and built chimney fan that will deliver high operational reliability and a long service life. 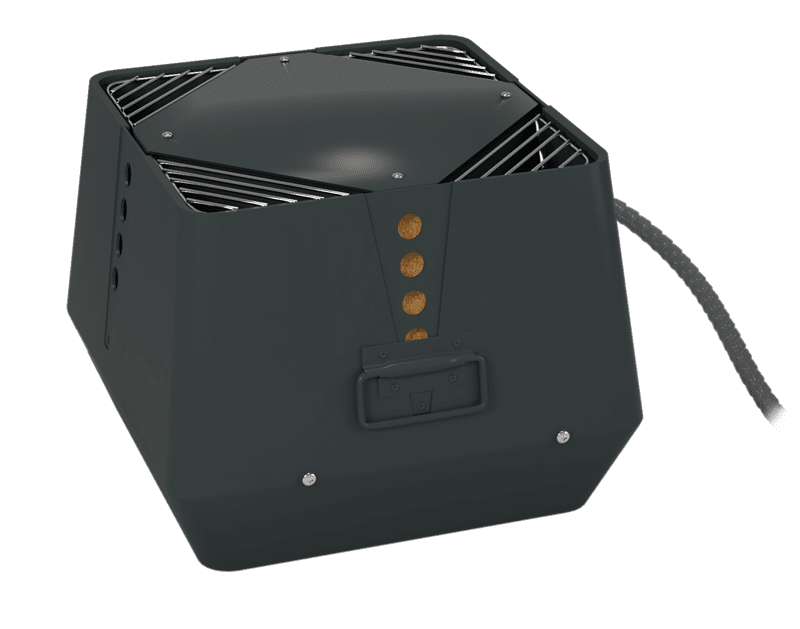 If you’re looking for a chimney fan specifically for a gas fireplace, then this is an ideal model.

This chimney fan features a vertical discharge and integrated monitoring system, which consists of a pressure control switch and flow control.

It’s manufactured from corrosion-resistant aluminium and can withstand constant flue gas temperatures of up to 200ºC. A centrifugal impeller means that this is a very efficient, yet powerful chimney fan.

For additional safety, this chimney fan also has a fail safe feature. This feature continually monitors whether the chimney draft in the flue is sufficient. If it is not, then the feature will automatically shut off the gas supply. 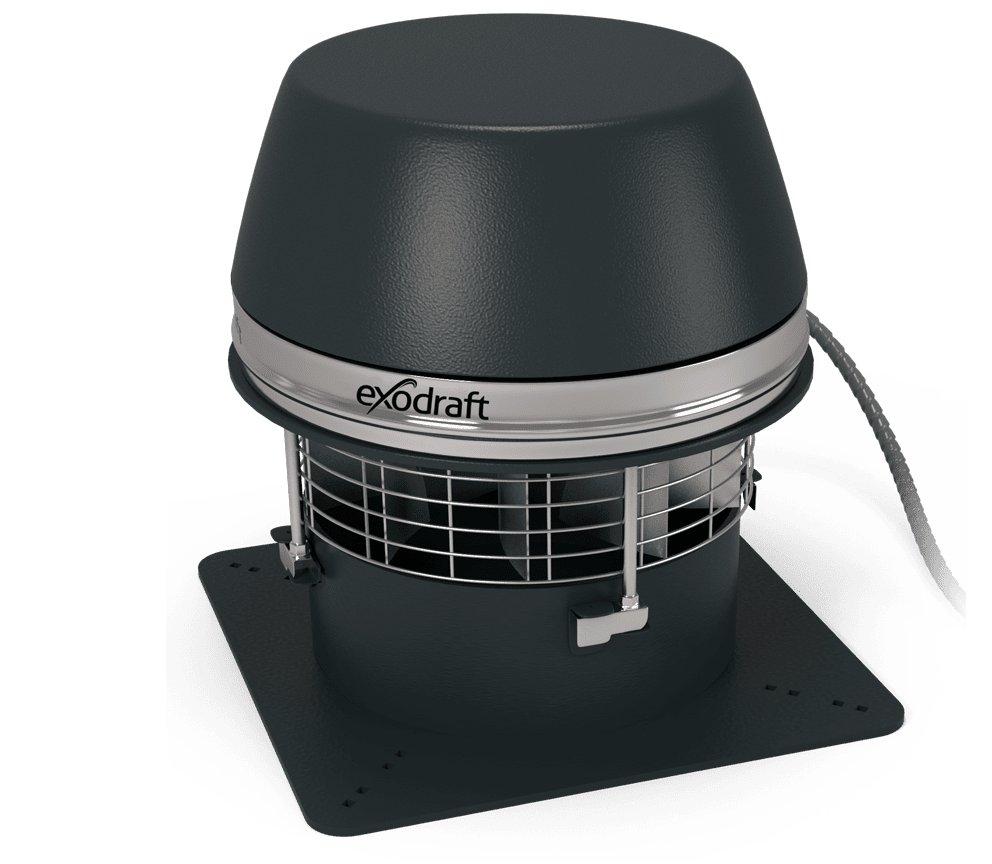 If your fireplace or appliance is likely to be burning at very high temperatures, then you’ll need a chimney fan that’s able to withstand these conditions.

This is one of those chimney fans.

This model features a patented cooling wheel that allows the fan to operate at temperatures up to 500ºC.

It has a horizontal discharge and is made of stainless steel with an aluminium housing. It also comes equipped with a stainless steel axial impeller, as well as having stainless steel bolts and screws throughout. The motor is continuously adjustable with a TRIAC control.

If you want your fireplace to be as efficient, warm and hassle-free as possible, buy a chimney fan. We’ve set out as much information as we can here to help you with your purchase, however if you still have any questions then please contact our expert team who will be happy to help. Contact us on 0161 7300 969 or submit a question using this form.

Chimney Sweeping: A Complete Guide | What Different Types of Chimneys Are There? | How to Stop Birds Nesting In Your Chimney